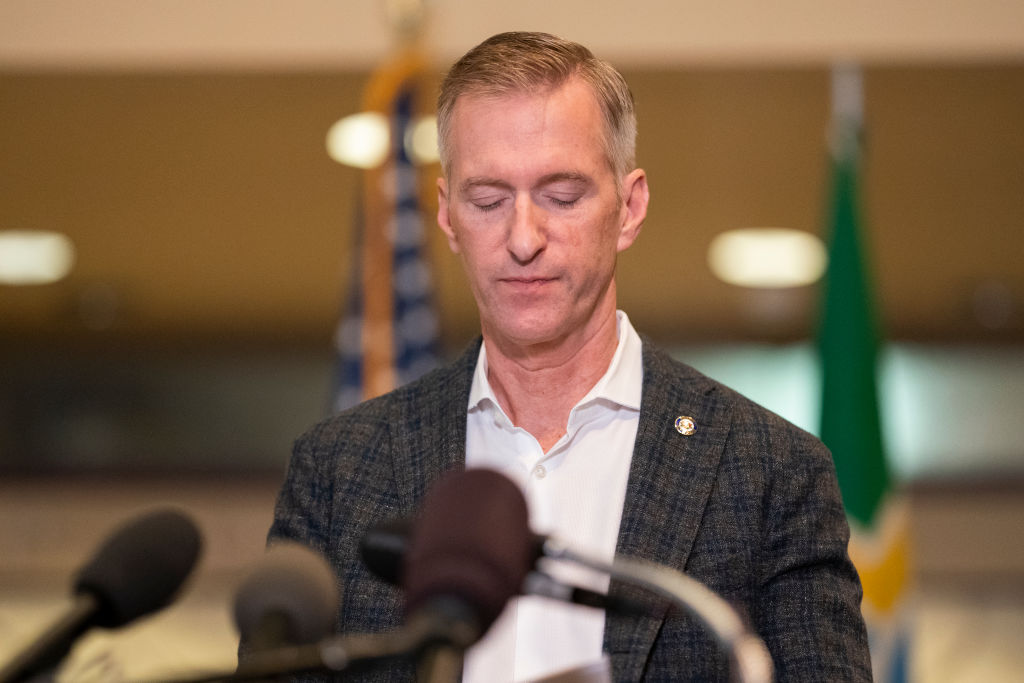 Portland, Oregon, Mayor Ted Wheeler is trailing his opponent, a far-left activist who recently declared, “I am Antifa,” by a shocking eleven points according to Portland’s independent media organization Willamette Week.

Wheeler has, of course, worked to create in-roads with Portland’s progressive community, largely supporting massive anti-racism and anti-police brutality demonstrations even when they gave way to more than 100 days of unrest — unrest that often turned violent and destructive and, at one point, required federal intervention.

As the unrest wore on, though, Portland’s “anti-fascists” became “anti-Wheeler,” and, as The Daily Wire reported last month, Wheeler’s home in a high-end residential area of Portland became a prime target for the nightly protests and, ultimately, an arson attack that left part of the building damaged. Wheeler was forced to relocate and even apologize to high neighbors for attracting destructive demonstrations.

“I want to express my sincere apologies for the damage to our home and the fear that you are experiencing due to my position,” Wheeler said in an email to the other residents of his $840,000-per-unit condominium building. “It’s unfair to all of you who have no role in politics or in my administration.”

His far-left policies, it seems, simply aren’t enough for Portland residents who blame Wheeler for encouraging even the low level of law enforcement intervention that some activists blame for encouraging the ongoing “anti-fascist” unrest, even though Wheeler forbid police from using most non-lethal means of crowd control and strenuously objected to state and federal efforts to step up enforcement in Portland.

Wheeler is up for re-election and his constituents seem prepared to jettison him in favor of Sarah Iannarone, described by Willamette Week as “an unknown Portland State University bureaucrat…preaching the value of sustainability and smarter transportation and land-use policies.”

Iannarone is about as far-left as politicians come. Back in early July, when the Portland demonstrations were still in their infancy, she tweeted that she was “Goddamn tired of watching reporters, medics, legal observers, peaceful protesters, and, yes, vandals getting targeted, arrested & assaulted by Portland Police. F*ck you, Ted Wheeler, seriously.”

She later declared her allegiance to the “Antifa” movement, calling herself an “everyday anti-fascist,” and declaring that, “I am Antifa.”

In case that wasn’t clear enough, Iannarone has a distinctive campaign wardrobe, which includes a skirt featuring the silkscreened likenesses of a number of Communist dictators.

Look at the skirt. pic.twitter.com/kAu3a3PgUF

The patchwork skirt has icons of Mao Zedong, Fidel Castro, and Che Guevara among others.

She’s also beating Wheeler by 11 points according to the latest polls compiled by a polling agency that is reportedly favorable to Wheeler.

“Wheeler polled at 30% to Iannarone’s 41%, with the remaining 29% of surveyed voters split between writing in a candidate (16%) or remaining undecided (13%),” Willamette Week noted. “It’s an especially notable result given that the poll was not conducted by either campaign, though PBA is supporting the mayor. (The poll has a four percentage point margin of error.)”