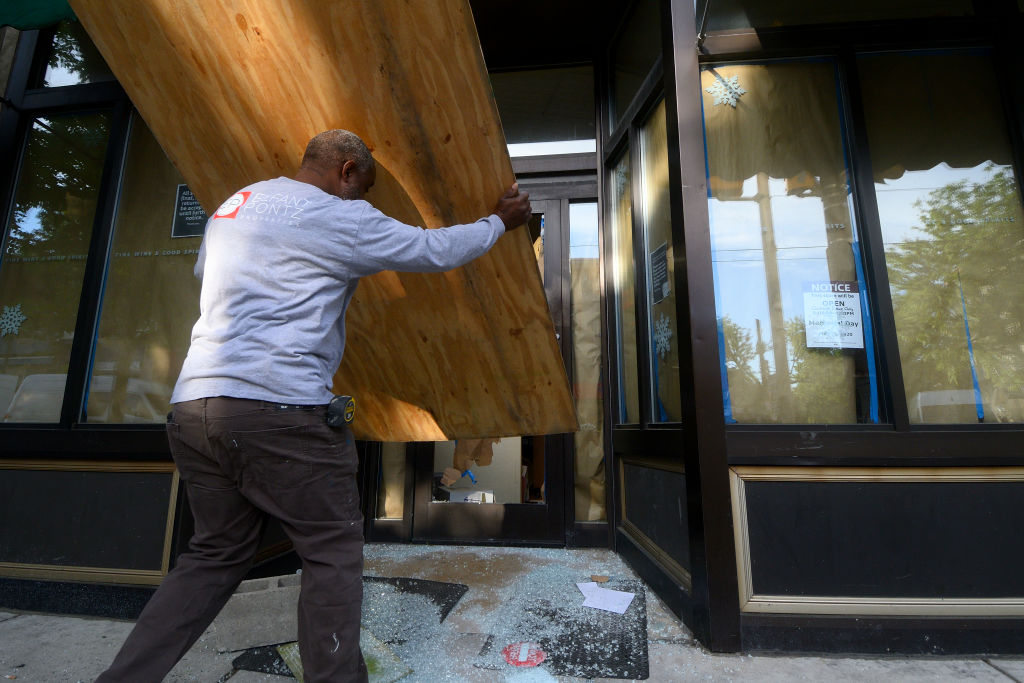 Riots and looting that took place following George Floyd’s death while in the custody of the Minneapolis Police Department will cost insurance companies up to $2 billion, making them the most expensive incident in insurance history.

Floyd’s death on Memorial Day weekend sparked nationwide anti-racism and anti-police brutality protests, which agitators, bent on violence, used as cover to wreak havoc in many of America’s major cities. The resulting damage is already costing cities like Minneapolis in the hundreds of millions of dollars, per Minneapolis Business Journal, and now insurance companies report they could be on the hook for billions more.

Axios reports Wednesday that insurance companies could pay up to $2 billion to cover damages, rendering the Floyd riots the single largest insurance event in history, utterly dwarfing the next highest payout event, the Rodney King riots, which cost about $1.4 billion in today’s dollars, and mid-century race riots in Los Angeles, California, and Detroit, Michigan, which cost around $350 million each.

“The protests that took place in 140 U.S. cities this spring were mostly peaceful, but the arson, vandalism and looting that did occur will result in at least $1 billion to $2 billion of paid insurance claims — eclipsing the record set in Los Angeles in 1992 after the acquittal of the police officers who brutalized Rodney King,” Axios noted Wednesday. “A company called Property Claim Services (PCS) has tracked insurance claims related to civil disorder since 1950. It classifies anything over $25 million in insured losses as a “catastrophe,” and reports that the unrest this year (from May 26 to June 8) will cost the insurance industry far more than any prior one.”

The Floyd riots are also notable because the destruction is ongoing in places like Portland, Oregon, and Seattle, Washington, and new riots and incidents of looting crop up in cities weekly, as new police-involved shooting incidents come to light. The $2 billion likely does not include damage in Rochester, New York, or Lancaster, Pennsylvania, both of which played host, last weekend, to demonstrations that eventually turned violent. And it definitely does not include anticipated unrest following the November presidential election.

“There could be riots [after the election] that lead to significant losses that would meet our reporting thresholds,” one expert told Axios.

The number also does not cover municipal losses, loss related to uninsured property, or the cost of quelling protests and repairing city property. Looting incidents in Chicago, Illinois, are expected to cost that city upwards of $60 million. Los Angeles told Fox News that it expects to pay out nearly $40 million in overtime to police officers and another $25 million to the National Guard.

“In Seattle, taxpayers spent $6.3 million in overtime, $67,478 on riot gear and $31,172 on pepper spray, flash bangs and other less than lethal weapons, according to SPD.  Police overtime in Portland, Oregon totaled $6.2 million,” the outlet reported back in August.

In smaller cities, the damage may be less but the cost is still astronomical: “In Tucson, police overtime for one night May 30 cost taxpayers more than $100,000 for 239 employees, about the annual salaries of two rookie officers. On that same Saturday night, Cleveland police racked up $3 million in overtime. Even small towns incurred costs: Fargo, N.D., spent $840,000 and Harrisburg, Pa., $50,000 in overtime.”

PCS also noted, in earlier interviews, that insurance costs, at this point, are just an estimate designed to help insurers anticipate how much cash to have on hand for eventual claims.

“It’s essentially a heads up to carriers, telling them to get ready for an influx of claims and payouts. It will take around three weeks for the company to make an estimate on the insurance bill,” the organization told MarketWatch back in June.

The estimate does, at least, fly in the face of claims made by some who defend the riots and looting as “reparations” or as legitimate forms of protest. In Chicago, the official Black Lives Matter contingent even went so far as to suggest that “anything they wanted to take, they can take it because these businesses have insurance.”