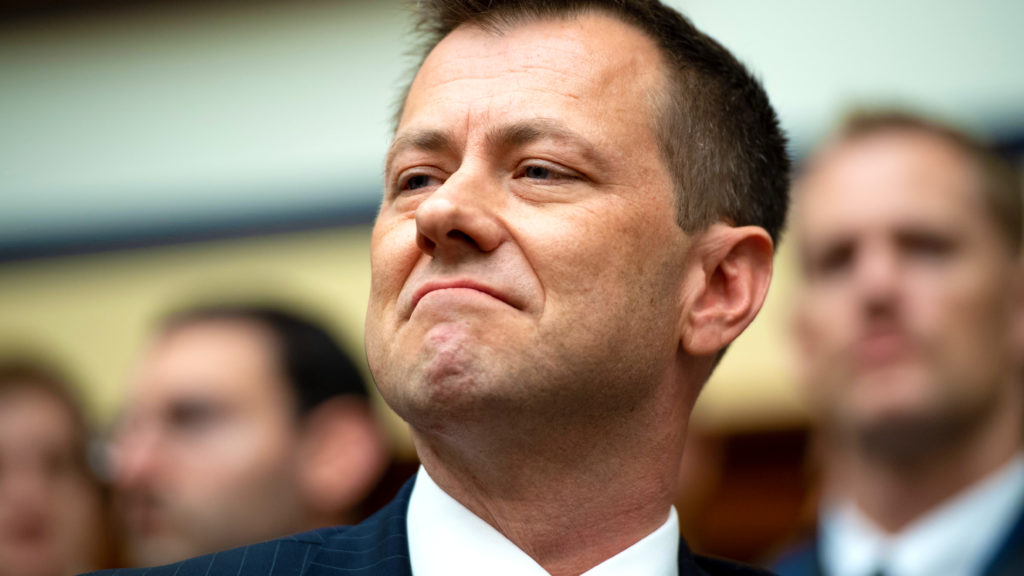 “Obamagate: The Movie” isn’t for the casual viewer. No, audiences should have a general sense of both the Russian collusion hoax that roiled the nation for more than two years as well as how the media framed every fraudulent second of it. That context makes “Obamagate” a delicious riposte to the spin we’ve endured. The production (which you can watch in full below) is muscular update on “FBI Lovebirds: UnderCovers,” the 2019 play featuring Kristy Swanson and Dean Cain as disgraced agents Lisa Page and Peter Strzok, respectively.

The film version, bolstered by new revelations gleaned since that play hit a D.C. theater, makes little attempt to disguise its theatrical roots, down to the audience chuckles. The narrative begs for a full-bodied Hollywood production, with all the appropriate bells and whistles that entails. Since no studio would go near this accurate narrative, it took provocateur Phelim McAleer and co., aided by a successful crowdfunding campaign, to make it happen.

The heart of the story proves his instincts anew.

Swanson and Cain’s characters flirt and flaunt their willingness to target then-candidate Donald Trump throughout the production. The dialogue, pure Verbatim Theatre, draws their conversations from the text messages they fired back and forth over several months.

That leaves us with credible chats that feel real and raw. It’s a nasty peek at Beltway life from two consummate “Swamp” creatures.

The texts allow for a sweet running gag where the stars spit out the emoticons capping their missives. That grown men and women use them to this degree offers a sly social commentary all on its own, but the bigger points remain.

These two self-absorbed agents let their political biases get the better of them, letting down the country in the process.

Swanson’s Page can be “Mean Girls” cruel at times, but she’s a piker compared to Strzok. Cain spits out his insults, which start with attacks on former Rep. Paul Ryan but mostly target Trump.

Still, Dr. Ben Carson, Sen. Mitch McConnell and even Glenn Beck get derisively name checked by the duo, more proof that their actions were far from neutral.

Of course, an FBI agent can believe whatever he or she wants without scrutiny, but when we witness a deeply flawed investigation smacking of a coup, it’s time to sniff out the clues.

“Obamagate” nearly capsizes with them.

Kudos to Cain and Swanson for making their characters as three dimensional as possible. Sure, the audience hisses at the right moments as they lean into their political biases.

The veteran players round out their villainy with softer tones. Swanson, in particular, radiates vulnerability when she longs to leave political life to spend more time with her family.

The line could have rung hollow, but Swanson gives it the proper pathos.

Cain’s Strzok, by comparison, is endlessly competent and cagey. Watch him maneuver around damning texts offers a wonderful character study. He’s smart, slick and unwilling to admit to a mistake, any mistake.

That’s true even when asked to defend texts mocking Walmart shoppers as, well, odious. It’s a nasty comment, but Strzok won’t cop to its obvious truth.

On a gut level it’s hard not to savor his stubborn streak.

Progressive productions too often demonize their conservative villains, stripping of both their humanity and nuance in the process. “Obamagate” offers a more full-bodied take on Strzok and Page without leaving out their “greatest hits.”

Yes, their “insurance policy” exchange gets an extreme closup.

A sharp screenwriter could leave us with similar impressions. Instead, the actual texts and testimonies (credit to screenwriters McAleer and Brian Godawa for putting them all together) do it as well as any original screenplay might.

The film’s stage origins are forgivable, but the stars’ leaning on lines just off camera are much less so. It’s likely Team “Obamagate” worked overtime to release the film in time for the 2020 elections, much like much of Hollywood dumped anti-Trump content on the October schedule for the same reason.

Still, it’s distracting and doesn’t allow the stars to consistently engage with their characters.

“Obamagate” would be dull if it focused solely on the Strzok/Page connection. It breaks up their banter with two sizable subplots. We see both former CIA Director John Brennan (Paul Michael Nieman) clutching a teddy bear, share ominous Tweets about Trump’s Russian connections.

Even better is former “Dynasty” star John James, clad in a Boy Scout uniform, reading FBI Director James Comey’s texts. He sells them as they should be peddled, grandiose snippets that tease his arrogant mien.

Arrogance courses through “Obamagate,” especially when Strzok is center stage. He’s too smart for government, too aware of its many flaws.

We’re also privy to Congressional transcripts where Page and Strzok get grilled for their text relationship, and its greater implications.

Strzok and Page spoke so fluidly about their Trump rage, never worrying their texts could come back to haunt them. Those less familiar with the FBI’s negligent behavior regarding collusion, and that’s being kind, may be aghast at what they see.

Verbatim Theater has its limitations, but “Obamagate” sneaks around most of them. The modest directorial cues make the most of the clever edits and asides. Plus, the production wraps with a narrative “kill shot” that puts a dagger in the Russian collusion heart.

And that’s before we’ve learned even more about the fatally flawed investigation in recent weeks, its ties to Hillary Clinton and how some FBI agents lunged for insurance policies for fear their actions would be called into question.

Those agents may never face the full consequences for their actions. For now, “Obamagate’s” blistering truths will have to suffice.

Watch the full film below: